Most Popular Baby Names from the Music Industry

Reference website, Listophile analyzed data from the Social Security Administration (SSA) to discover the most popular music-inspired baby names in the United States. Here we reveal the chart-topping pop stars, musicians, and bands who are inspiring our baby’s names.

The names we choose for our children often reflect our personal tastes and the world around us – and it seems our favorite musicians are a noteworthy source of inspiration.

In today’s never-ending quest for new and creative baby names, increasing numbers of parents are turning to the music industry for inspiration. For a parent wanting to signify their child’s uniqueness and non-conformism, what better way than to give them a name from the world of music?

Musical names sound iconic, and for music lovers, they are the perfect channel of self-expression. Music – and names – evoke emotions and feelings. They hold sentimental value – and both allow us to express our individuality.

Choosing a music-inspired baby name also adds a personal touch, which is especially heartfelt if the parents-to-be are celebrating their favorite artist. Baby names inspired by musicians also seem to have an incredibly hopeful touch to them, perhaps aspiring their child to future greatness.

The team at Listophile analyzed the latest official data from the SSA (released May 2022) to find the most popular music-inspired baby names for girls and boys in the United States.

Included is a mix of names inspired by Gen Z icons like Ariana Grande, Taylor Swift, and Abel Tesfaye as well as classic music legends such as Elvis, Bob Marley, and John Lennon.

The study also identified the most trending baby names from the music industry, i.e. names rising fastest in popularity year over year. For girls, these were Halen, Halsey, Creedence, Harrison, and Jovi; while Mercury, Jovi, Kanye, Vaden, and Halen rose most in popularity for boys.

We start by listing the top 10 music-inspired names for girls and boys. Beyond this, we dig deeper into the top 40 names to seek out more unique musical names parents are giving their children. 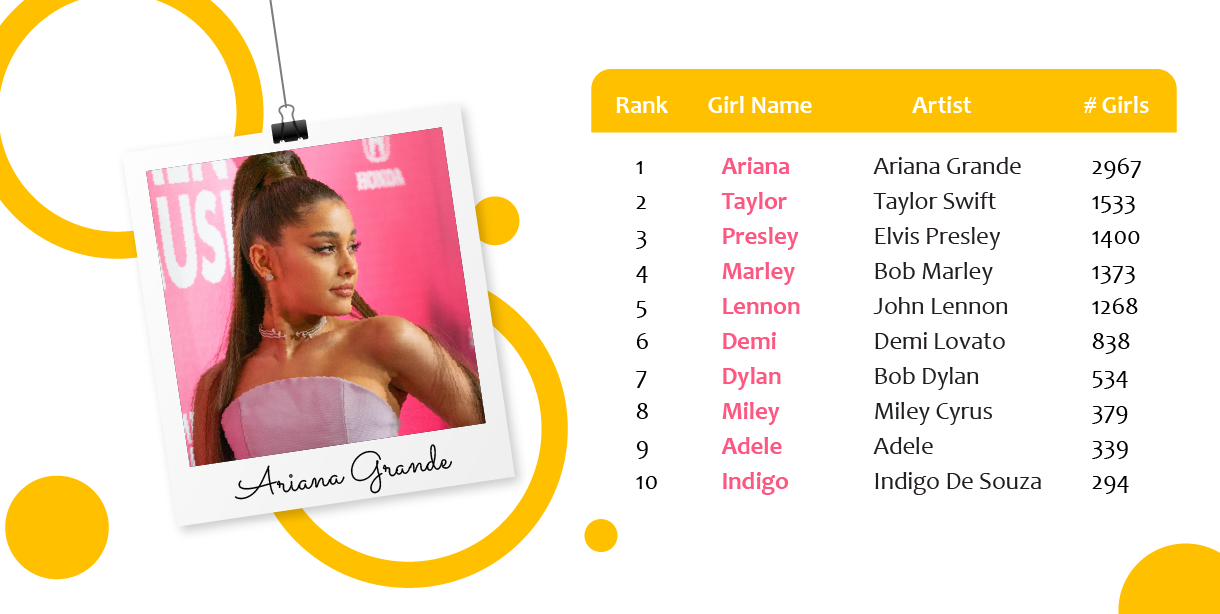 Topping the list is ‘Positions’ singer Ariana Grande. The name Ariana gives a striking sense of femininity, but also suggests girl power! As one of the most famous female pop sensations, it’s no surprise that last year almost 3,000 baby girls were named Ariana.

Second on our list is Taylor, named after ‘Evermore’ album singer-songwriter Taylor Swift. Swift is famous for singing countless songs straddling multiple genres. Her discography includes ‘Love Story’, ‘Blank Space’, and ‘Look What You Made Me Do.’ More than 1,500 baby girls born last year share the singer’s name.

The third name on our list is Presley, after the iconic Elvis Presley. Presley has since become a common household name – over 1400 babies were given this name last year. Elvis continues to have devoted fans, with many of his admirers falling in love with this name. This strong, yet feminine, choice is just too irresistible to ignore!

The fourth name on our list refers to Bob Marley, a famous Jamaican singer, songwriter, and musician. Marley is considered a pioneer of reggae, with his career marking a combo of reggae, rocksteady, and ska elements. Fans of Marley’s work continue to pay tribute to the singer by naming their daughters after him!

Lennon refers to John Lennon, an unforgettable musician who was part of one of the most influential and famous bands of all time – The Beatles. The name Lennon allows fans to pay tribute to a legend with an obvious name connection. Lennon is the only name to appear on both female and male Top 10 lists. Country star Thomas Rhett shared that his daughter, Lennon, was named after the famous Beatle.

‘Sorry Not Sorry’ singer, Demi Lovato courageously came out in 2021 as non-binary and changed their pronouns to ‘they’ and ‘them.’ Lovato’s musical talent, inspiration, and countless empowering songs has earned them a highly successful career. The popularity of the name Demi is a testament to this musical sensation.

While Dylan is commonly a boy’s name, it’s starting to trend for little girls. It brings music icon Bob Dylan to mind, a man often regarded as one of the greatest songwriters of all time. This name is here to stay, just like the man himself, with a career spanning more than 60 years.

Need we say any more than Miley Cyrus? Cyrus kicked off her career as Hannah Montana on the Disney Channel but soon expanded her success into the world of music. Often perceived as both a pop star and a rockstar, Miley makes an unforgettable name for any little girl!

Coming in ninth place, Adele has made her mark from across the pond, with 339 American baby girls named Adele last year. Often described as music royalty, the British pop star’s name is of German and French origin and actually means “noble, nobility.” Adele is one of the planet’s most loved singers, making her a popular eponym.

‘Hold U’ singer Indigo De Souza has taken the world by storm. The girl’s name Indigo increased in popularity last year by 22%, likely influenced by this empowering singer. It also gives suggestions of a deep navy color, offering another layer of meaning to this popular girl’s name. 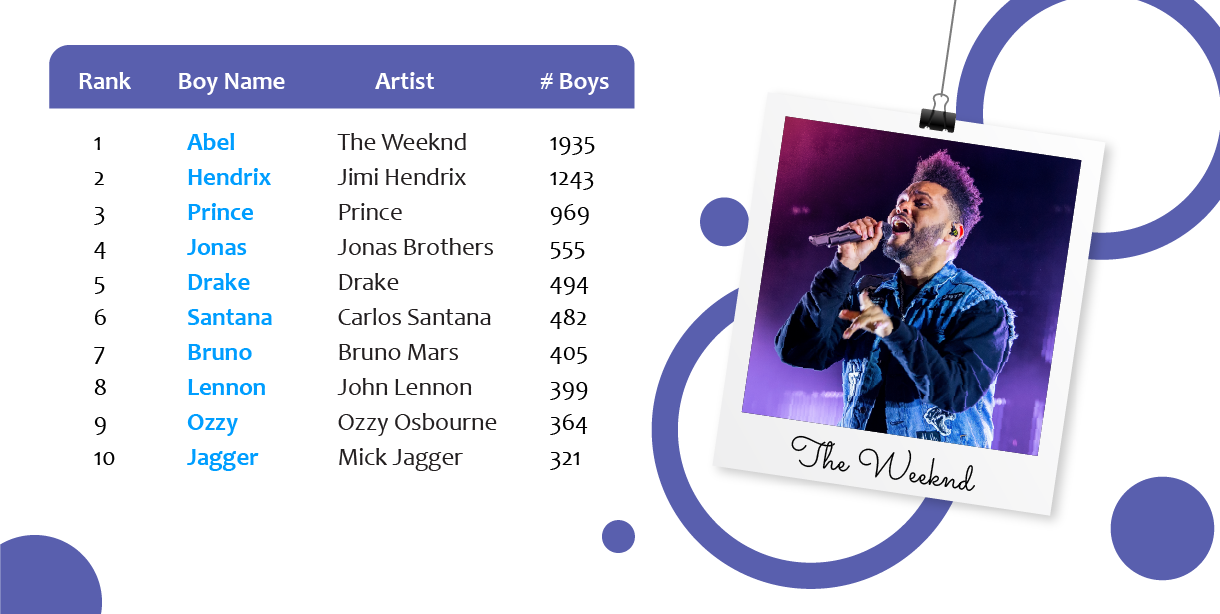 In first place, the most popular musical boy’s name is Abel, referring to Abel Makkonen Tesfaye AKA The Weeknd. As the singer rises in popularity with his continuous smash hits, including ‘Take My Breath’ and ‘Blinding Lights,’ so his name continues to rise in popularity. Abel Tesfaye is credited as the inspiration for nearly 2,000 babies being named Abel last year.

One of rock and roll’s most iconic electric guitarists, many parents have named their boy after Jimi Hendrix. This cool name has risen in popularity, playing up to a few current trends, including the edgy ‘x’ ending.

It’s no surprise that so many baby boys have been named after the legend Prince. His songs fixated an entire generation, and he has inspired musicians all over the globe. The ‘Purple Rain’ singer has undoubtedly earned his place on the list!

The name Jonas is attributed to the famous Jonas Brothers, a trio who first rose in popularity when performing on the Disney Channel. After splitting up, the brothers got back together again to release more epic tunes and have triggered countless parents to pay tribute to the band by naming their sons Jonas.

‘Certified Lover Boy’ singer Drake is known all over the globe as one of the biggest rappers in history. It’s no surprise that many boys are named Drake in honor of the artist. The Grammy Award-winning musician isn’t yet done making his mark on music, making us wonder what masterpieces he will produce next.

Placed seventh on our list, the name Santana pays tribute to Carlos Santana, a guitarist who rocketed to fame in the late 1960s with his band of the same name. The band created a fusion of Latin American jazz and rock and roll, enabling them to generate memorable tracks that will take parents-to-be back in time.

Eighth on our list is Bruno, referring to singer Bruno Mars. With memorable tracks, including ‘Uptown Funk’, ‘Locked Out of Heaven’ and ‘The Lazy Song,’ Mars has certainly left his mark on music. The singer, as well as his name, is clearly celebrated by parents across America.

Lennon takes the number 9 spot on our boy’s list. John Lennon has made outstanding contributions to music, especially as part of The Beatles – one of the world’s most influential bands. Many parents are still honoring his musical talent by naming their sons after him.

The name Ozzy was given to 364 baby boys last year as a nod to the lead vocalist of the heavy metal band Black Sabbath, Ozzy Osbourne. The boy’s name Ozzy rose 93% in popularity last year.

Rounding off our top 10 list of boy names inspired by music artists is Jagger, referring to rock icon, Mick Jagger. Jagger’s distinctive voice and energetic live performances have made a mark on music for more than six decades. Parents continue to celebrate the frontman of the Rolling Stones with this cool boy’s name.

Parents looking for a more unique musical name may be interested in searching beyond the top 10 lists.

The baby names below also share memorable connections to our favorite pop stars, musicians, and bands.

Check out the top 40 music-inspired baby names for girls and boys:

Top 10 Most Trending Girl Names from the Music Industry

The following girl baby names rose the fastest in popularity year over year:

Top 10 Most Trending Boy Names from the Music Industry

The following boy baby names rose the fastest in popularity year over year:

If you’re an expectant parent struggling to name your little one, perhaps you feel compelled to peek into your own love of music to spark some inspiration?

Whether you have a favorite band, solo artist, or even a song – you’re sure to find a musical baby name you’ll fall in love with. Hopefully these lists of musical names have given you some inspiration!

1. Listophile’s report is based on the collection of given names as recorded by the SSA. This report collected datasets from the year 2021 from 3,361,375 instances of baby names. The names were ranked in order of the largest number of given names to discover the most popular music-related baby names.

2. For the purposes of the study, names were excluded from the analysis if the connection to the musician was deemed ambiguous. For example, if the name is too commonly used or has other associations. These names included Michael, Jackson, Blake, Norah, Eddie, Jonny, Journey, and Macy.